Maintained nursery schools are under threat. Please help to save our Nurseries. 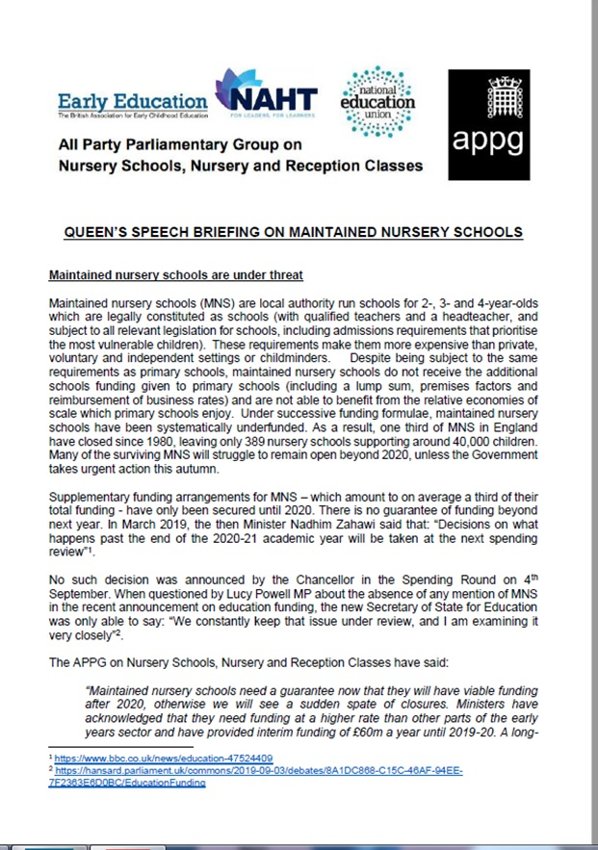 Maintained nursery schools (MNS) are local authority run schools for 2-, 3- and 4-year-olds which are legally constituted as schools (with qualified teachers and a headteacher, and subject to all relevant legislation for schools, including admissions requirements that prioritise the most vulnerable children). These requirements make them more expensive than private, voluntary and independent settings or childminders. Despite being subject to the same requirements as primary schools, maintained nursery schools do not receive the additional schools funding given to primary schools (including a lump sum, premises factors and reimbursement of business rates) and are not able to benefit from the relative economies of scale which primary schools enjoy. Under successive funding formulae, maintained nursery schools have been systematically underfunded. As a result, one third of MNS in England have closed since 1980, leaving only 389 nursery schools supporting around 40,000 children. Many of the surviving MNS will struggle to remain open beyond 2020, unless the Government takes urgent action this autumn.
Supplementary funding arrangements for MNS – which amount to on average a third of their total funding - have only been secured until 2020. There is no guarantee of funding beyond next year. In March 2019, the then Minister Nadhim Zahawi said that: “Decisions on what happens past the end of the 2020-21 academic year will be taken at the next spending review”1.
No such decision was announced by the Chancellor in the Spending Round on 4th September. When questioned by Lucy Powell MP about the absence of any mention of MNS in the recent announcement on education funding, the new Secretary of State for Education was only able to say: “We constantly keep that issue under review, and I am examining it very closely”2.
The APPG on Nursery Schools, Nursery and Reception Classes have said:
“Maintained nursery schools need a guarantee now that they will have viable funding after 2020, otherwise we will see a sudden spate of closures. Ministers have acknowledged that they need funding at a higher rate than other parts of the early years sector and have provided interim funding of £60m a year until 2019-20. A long-
1 https://www.bbc.co.uk/news/education-47524409
2 https://hansard.parliament.uk/commons/2019-09-03/debates/8A1DC868-C15C-46AF-94EE-7F2363E6D0BC/EducationFunding
term solution must include a commitment to fund maintained nursery schools on the same basis as all other schools, including a lump sum to cover the statutory requirements which private and voluntary sector nurseries are not required to meet”.3
The organisations supporting this briefing would argue that the proven value of MNS is such that instead of nursery schools being threatened with closure, the Government should be investing in existing provision as well as opening new MNS in areas that don’t currently benefit from their high-quality and inclusive provision.
The importance of maintained nursery schools
Maintained nursery schools are some of the highest performing education institutions in our education system. 65% are rated ‘outstanding’ and 35% ‘good’ by Ofsted. They also buck the trend of which so often sees the most disadvantaged chiildren receiving the lowest rated education – as the previous Chief Inspector of Schools commented: “the only early education provision that is at least as strong, or even stronger, in deprived areas compared with wealthier areas is nursery schools”.
Maintained nursery schools transform lives, especially for some of our most disadvantaged children, because of the quality of education they offer. No other part of the early years sector has the same track record at helping disadvantaged children to catch up with their more advantaged peers. 64% of MNS are in the 30% most deprived areas of England. With more and more children living in poverty, it is vital that we ensure sustainable nursery school provision in every community.
They have a unique pool of expertise in supporting children with SEND in the early years and helping those children access their entitlement to early years education, often taking children whom other settings do not have the resources or expertise to support. Nursery schools have over twice as many children with SEND as the national average (13.8% of children, compared to the national average of 6.3%).
The whole early years sector benefits from the expertise of maintained nursery schools acting as catalysts to raise standards in their locality through supporting schools and early years settings to work together to improve their quality. As a national network, which includes 36 Early Years Teaching Schools, these hubs of expertise are a vital resource to draw on, especially as local authority early years services have been hugely cut back and are no longer able to provide the same level of training and support.
Actions you can take to support maintained nursery schools
• Please consider writing to the Secretary of State for Education and ask him to:
- Confirm that the Government will continue to provide the supplementary grant of £60 million beyond August 2020 to prevent further closures.
- Crucially, provide some long-term funding that fully enables the continuation of high-quality provision in maintained nursery schools
- End the uncertainty around the maintained nursery schools for our parents and staff.
3 https://www.early-education.org.uk/sites/default/files/MNS%20campaign%20pack%20June%202019.pdf
• Sign and publicise on social media the School Cuts petition to the Prime Minister4 asking him to take action to save nursery schools. Over 20,000 people have signed it so far, but we want to add to that number before we hand it in at Downing Street next month #SaveOurNurseries #SchoolCuts
4 https:/

Free meals and activities for kids during the Summer school holiday 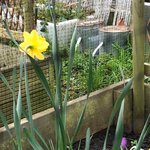 Stay and Play Saturday 21st May 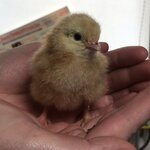